The New York Times, America’s national newspaper of record, has published a forum debating the existence of Asian-American quotas in the Ivy League.  My own contribution, drawn from my recent article The Myth of American Meritocracy, focused on the statistical evidence:

Just as their predecessors of the 1920s always denied the existence of “Jewish quotas,” top officials at Harvard, Yale, Princeton and the other Ivy League schools today strongly deny the existence of “Asian quotas.”  But there exists powerful statistical evidence to the contrary.

Each year, American universities provide their racial enrollment data to the National Center for Education Statistics, which makes this information available online.  After the Justice Department closed an investigation in the early 1990s into charges that Harvard University discriminated against Asian-American applicants, Harvard’s reported enrollment of Asian-Americans began gradually declining, falling from 20.6 percent in 1993 to about 16.5 percent over most of the last decade. 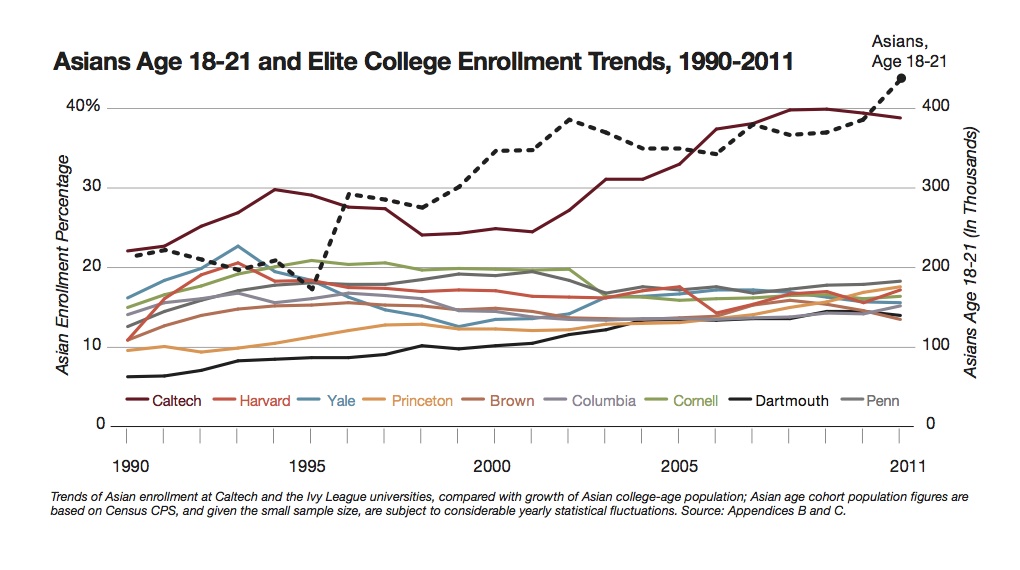 This decline might seem small.  But these same years brought a huge increase in America’s college-age Asian population, which roughly doubled between 1992 and 2011, while non-Hispanic white numbers remained almost unchanged.  Thus, according to official statistics, the percentage of Asian-Americans enrolled at Harvard fell by more than 50 percent over the last two decades, while the percentage of whites changed little.  This decline in relative Asian-American enrollment was actually larger than the impact of Harvard’s 1925 Jewish quota, which reduced Jewish freshmen from 27.6 percent to 15 percent.

The percentages of college-age Asian-Americans enrolled at most of the other Ivy League schools also fell during this same period, and over the last few years Asian enrollments across these different universities have converged to a very similar level and remained static over time.  This raises suspicions of a joint Ivy League policy to restrict Asian-American numbers to a particular percentage.

Meanwhile, the California Institute of Technology follows a highly selective but strictly race-neutral admissions policy, and its enrollment of Asian-Americans has grown almost exactly in line with the growth of the Asian-American population.

The last 20 years have brought a huge rise in the number of Asians winning top academic awards in our high schools or being named National Merit Scholarship semifinalists.  It seems quite suspicious that none of trends have been reflected in their increased enrollment at Harvard and other top Ivy League universities.

Some individuals have suggested that Asian-Americans no longer apply to the Ivy League in large numbers and this explains their reduced presence.  The prestigious University of California system routinely releases the racial totals for its college applicants, which allows the public to examine admission rates by race.  During the 1980s,  Ivy League colleges sometimes did so as well, but more recently have begun keeping these figures secret.  If Harvard and the other Ivy League schools simply released their racial application totals for the last 20 years, we might easily resolve the disturbing suspicion that they have quietly implemented a system of “Asian-American quotas.”

Since the Ivy League universities currently release their yearly racial totals both for admissions and for enrollments, I cannot see what plausible excuse they might have against also releasing their racial application totals.  This would allow us to examine the trends of racial admission rates for the last couple of decades, and decide whether or not these seemed suspicious.

Between 1980 and 1987 the Brown University admissions rate for Asian-American applicants dropped by over 40% compared with that for all other racial groups.  This discovery provoked considerable media scrutiny during the 1980s and eventually contributed to a federal investigation into anti-Asian discrimination at elite colleges. Perhaps as a consequence, the Ivy League has steadfastly refused to release any subsequent admissions rate figures, raising obvious suspicions that they might have something to hide.

Last week, Charles Murray of the conservative American Enterprise Institute, one of America’s most prominent social scientists, argued that the statistical data seems to demonstrate a clear pattern of racial discrimination against Asian-American applicants to Ivy League universities.  Now this New York Times forum has raised exactly the same question, including similar charges by former Delaware Lt. Governor S.B. Woo, who served as Founding President of 80-20, one of America’s leading Asian-American advocacy organizations.

American academics and journalists all across the political spectrum should begin asking Harvard and the other Ivy League universities to release the racial application totals which might substantiate their claims that they have not adopted “Asian-American quotas.”

This entry was posted in Immigration/Race, Meritocracy, UnzColumn and tagged Meritocracy. Bookmark the permalink.